I blame jo for showing me this, because now I want one. Being thoroughly evil, she's even going to drag me to a bike shop so we can test ride that and other Swobo bikes. Of course, I lust after this, but it really doesn't make any sense to buy, as I already have a quite wonderful and more serious expensive bike. I only need something that I can thrash around on when I want to be less serious (i.e. No special shoes needed!) and/or want to run an errand and thus lock the bike up. Which is why the Folsom really struck my fancy. (Then again, I wonder if I can get something like that cheaper... =)

And that's enough 'stream of consciousness' for me. My internal grammer Nazi is reeling at the above paragraph.
Posterous works great (heck, this email posting thing has made me post *much* more than I ever used to post to LiveJournal), but there are a few things that I think might be good ideas. Braindump:

I've cleaned it up a bit, so I figured I could share it with the world, in case anyone else is interested in such a product. (This is also a test to see what happens if I send a Ruby script and a YAML file to Posterous.

This is meant to be run from cron (or the scheduler of your choice) as often as you like. I currently run it every 5 minutes. If you're not  scraping from Posterous, you can leave the Posterous hack part off. While it in theory supports pulling from multiple feeds, it doesn't keep track of the last entry in each feed seperately, so it wouldn't work quire right in the current version. (I'll probably fix that in the near future and post again) I think that's about all I have to say about that for now. Maybe if someone expresses interest in using it, I'll write a proper README. =]

Update: So the attachment thing was an epic fail. It just dumped the entire thing into the post. I will put the files up here.

Rock on. This is going to get me to dust off my much neglected DS. I can't wait to play it again. Now all I need is Secret of Mana. Come on Nintendo (and Squeenix), put it on the Virtual Console already!

I have successfully hacked together a script to ship my Posterous updates to my Live Journal. When I get time to clean up the script, and remove the hardcoded things (like my username and password ;), I'll post it for the world to see. But now, I really should go to sleep.

Yesterday, we went scouting for a place to have Emma's first birthday party. Since it's close by our house, we went up to Lake Temescal. While it probably is not going to be the location, I did take some pictures. The last picture in this bunch isn't from Lake Temescal, it's the view from up on Grizzly Peak Road. 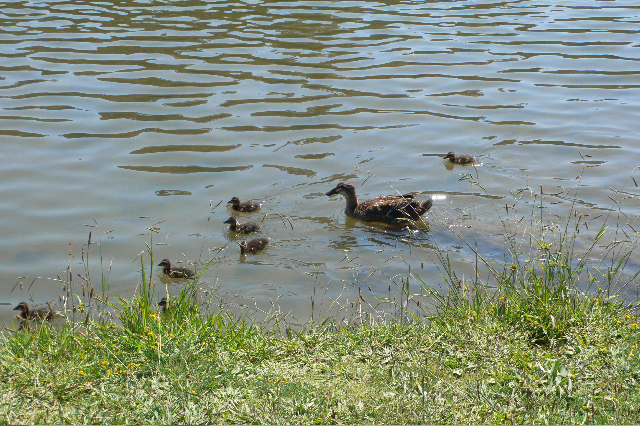 Seriously. This is why Jeremy is one of the most awesome people I know.
LinuxWorld is no longer as cool or fun as it once was, but I tend to find it worth it just to get the latest Debian t-shirt. I often donate to the EFF as well when I'm there, and sometimes there is something else neat to see on the floor. It is currently possible to register for a free exhibits pass. They apparently also have www.linuxworldexpo.com/live/12/ehall//SN460564">community days, which you can register for (also free!). I registered for the Ubuntu one, hopefully I'll be able to make at least part of that. Anyways, if you're going to go, drop me a line, and maybe we can meet up at the show.

When my wife's laptop broke, we opted not to pay to fix it or buy a new one. The newest Ubuntu had impressed me, and I was pretty sure that I could use my work laptop running Linux, and let her use my MacBook Pro most of the time. This worked ok for a couple of months, but as time went on, I started to notice more and more things that I missed from the Mac. I've found that I've really gotten used to the feel of Apple's keyboards, and even more importantly, the screen on my Mac is so much easier on my eyes than the LCD in the HP laptop I got from work. Perhaps it's the way Mac OS X draws fonts, perhaps it's something else in the Mac OS X rendering layer, perhaps the MacBook Pro simply has a better screen. Whatever the case, my eyes are vastly happier when using the Mac.

Then there are the many things in Mac OS X that are simply more polished than in Ubuntu. Perhaps I should be a good open source citizen and take the code and fix the things that are broken, but I simply don't have the interest. There are way too many other things I'd rather be hacking on than trying to fix things like Ubuntu's network configuration application (I probably should write a future post on how this is broken, so maybe someone with interest could fix it). So while I don't have an addiction to any of Apple's other crack (I rarely use my iPod, I don't own (and don't plan to own) an iPhone or an Apple TV or what not), I do, despite my best efforts, have a Mac OS X (and Apple hardware to a certain extent) addiction.

Now all I have to do is find out how to get another Mac laptop for our household, preferably free... (sometimes it's annoying working for a company that makes computers...)
It looks like they actually are making Diablo III. I sense a new addiction incoming.
Browse the Archive »